What is MacConkey agar? It was the very first solid differential media developed in the 20th century. It was named after Alfred Theodore MacConkey, the one who developed MAC.

It is both a selective and differential media, which is helpful isolating and differentiating non-fastidious gram-negative rod, specifically bacteria in the genus Pseudomonas and Enterobacteriaceae family. (3, 4)
MacConkey’s Agar is a selective medium.

It prevents the growth of gram-positive bacteria because of the presence of bile salts and crystal violet. Only gram-negative bacteria has the ability to thrive on MacConkey agar.

At the same time, MacConkey agar is a differential medium because it allows you to differentiate the types of microorganisms based on the color of the medium. (1, 3, 4) 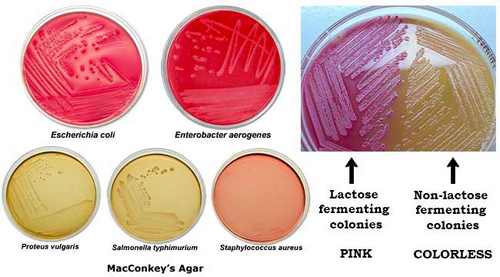 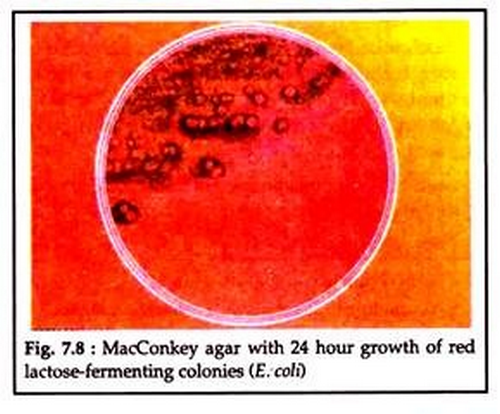 What are the ingredients of MacConkey agar?

The principles of MacConkey agar test

How is MacConkey Agar test performed?

To perform a MacConkey agar test, the first thing to do is to suspend about 50 grams of dehydrated medium in one liter of purified or distilled water. Bring to boil to make sure that the medium is completely dissolved. Using the autoclave method, sterilize at 15 lbs pressure for about 15 minutes. Allow to cool. Mix the mixture before pouring into the sterile petri plates. (5, 8)

How to interpret the result of MacConkey agar test? Lactose fermenting bacteria grow as red or pink. They can also be surrounded by acid precipitated bile. Why does the color turned red? The color turns red because of the production of acid from the lactose when the medium’s pH level dropped below 6.8. Bacteria categorized as lactose fermenters eat the lactose, which is present in the MacConkey agar medium. In the process, the bacteria will produce an acidic by-product causing the medium to turn red or pink. (9, 10)

On the other hand, the appearance of the medium will not be altered if the bacteria strain is lactose non-fermenting. Examples are Salmonella and Shigella. The MacConkey medium does not change in color. It is actually the colonies of lactose fermenting bacteria that are responsible for the discoloration. What is the implication if the colony grows on MacConkey? Bacteria that grow on MacConkey are classified as gram negative because gram positive bacteria do not grow on MacConkey agar medium. (7)

The pink or red colonies are coliform bacteria in the Enterobacteriaceae family. Examples are Citrobacter, Escherichia, Enterobacter, Hafnia, and Klebsiella. If these bacteria are present it means that the food and water are unsanitary or not safe for human consumption. On the other hand, examples of non-lactose fermenting bacteria include the members of Enterboacteriaceae like the Salmonella, Proteus, Yersenia, Morganella, Shigella, Providencia, and Edwardsiella. (5, 7, 8)

Why agar is used in growing bacteria?

Agar is used to growing bacteria for specific purposes. The bacteria are grown on solid surfaces because they enable you to see individual colonies growing. The bacteria cells that grow on that medium were actually descendants of the parent cells. By using agar, you can easily see the presence of contaminants and the kind of contaminants because they look distinct on the agar plate.

Agar is a polymer like gelatin, but it has a better melting temperature when compared to the usual gelatin products. The MacConkey agar can only develop gram negative bacteria. The agar used in MacConkey test contains crystal violet colorant, which is the first colorant used in gram staining. What crystal violet does is it deeply penetrates the cell wall of gram positive bacteria.

It restraints the growth of gram positive bacteria, making the MacConkey agar a selecting medium. If you want to find out if the bacteria is gram positive, see to it that you added a crystal violet in the agar formula.

That way, you will be able to conclude that the bacteria is indeed gram positive. It is the reason why gram staining is not that reliable in identifying organisms. Additional test should be done to confirm the strain of bacteria in the medium and the MacConkey agar test is a reliable test. (4, 5, 9)

What to keep in mind?