What is Canavan Disease?

Canavan disease is among the group of genetic degenerative disorder known as Leukodystrophies which is a degeneration of the white matter or the myelin protecting the axon of the neuron.

Canavan disease is a rare and fatal disorder in infancy characterized by advancement in the damage to the brain and the nerve fibers.  This disease is linked to deterioration of the white matter or the myelin in the brain that functions in protecting every nerve in the brain and spinal cord to maintain the proper transmission of nerve impulses in the body.

This disease was first identified in 1931 by an American physician and pathologist named Dr. Myrtelle Canavan after she has studied a child who died and was discovered to have a spongy tissue in the brain.  The involved gene in the disease was later on identified in 1993 by Dr. Reuben Matalon after tissue samples from two siblings afflicted with the disease was given to Dr. Matalon for research and study.

Canavan disease is a genetic neurologic disease that is common in infancy and the onset of manifestation of the disease usually starts to become evident during the 3rd month of life and progresses rapidly.  Initially, rapid increase in head circumference is evident including inability in head control of the child.  The developmental milestone of the child with Canavan disease is greatly affected as the disease is causing progressive damage to the brain and the nerve fibers of the brain.  The general symptom of the disease may vary however although the general and common symptoms include the following:

Children with Canavan disease are usually quiet and apathetic and are usually irritable.  They often lack in energy and are sluggish.  The child may also suffer from seizure, blindness, deafness and probably paralysis.  Developmental milestone is diminished as the child’s basic motor skills are lost including mental retardation of the child which is usual in Canavan disease.  It is expected that a child may not live over the age of 10 or usually dies before they reach the age of 4 especially to those who do not receive any treatment and therapy.

Aspartoacylase enzyme which is responsible for the production of ASPA gene is the primarily implicated for the disruption of the normal breakdown of N-acetyl aspartate leading to its excessive production resulting to damage in the myelin sheath.

Myelin sheath functions in insulating the axon of neuron vital for the proper function of the nerve fiber in transmitting impulses to the body.  Myelination or the formation of myelin sheath normally occurs during the 14th week of gestation or fetal development although the formation is usually little until at the time of birth.  Myelin sheath is rapidly produced by the time of infancy until the child reaches adolescence.

Genetic mutation of ASPA is inherited by an offspring in an autosomal recessive manner.  It is probable that a child can inherit the disease when both parents are carriers of the defective gene.  The disease however, is more common in people of Ashkenazi Jew ancestry although people from other ethnic background can also get affected.

The brain is characterized with a spongy degeneration in Canavan disease as a result of defective and deformed myelin sheath that should have been protecting the nerve fibers.  The hallmark of the disease however, is an elevation in the levels of N-acetylaspartic acid resulting from a faulty aspartoacylase enzyme.  It is in the detection of levels in this enzyme that Canavan disease can be diagnosed through skin cells samples or through blood samples as carried out in genetic testing.

Manifestation of Canavan disease usually occurs during early infancy or at the 3rd month of life.  Clinical manifestation is being noted for diagnosing such as presentation of joint stiffness and hyperreflexia including as well the presence of optic atrophy.

Pre-natal screening is recommended for DNA analysis especially to couples of Ashkenazi background and couples suspected carriers of the mutated gene.

The exact cure or treatment for Canavan disease has not been identified except for the goal of treatment towards the symptoms of the disease.  Supportive care is also being given to the patient as well as support to the family of the patient.

Lithium citrate is an experimental drug being used to reduce the levels of N-acetyl aspartate although this drug is still being investigated.  Other drugs for the treatment of Canavan disease are also being experimented and studied.

Collection of pictures of Canavan Disease… 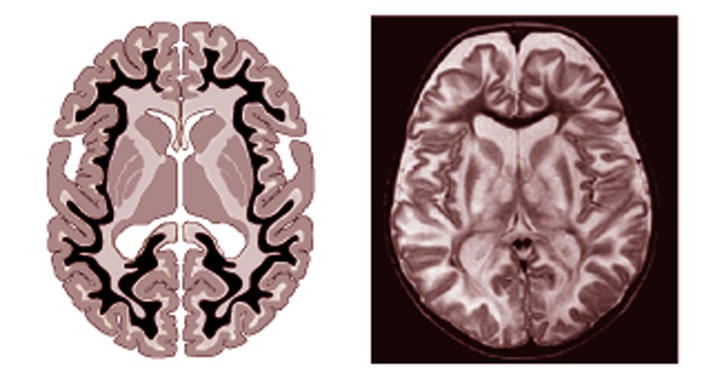