Have you ever seen a person with insanely swollen lower body? There are chances that the person may be suffering from a serious condition called elephantitis. The medical term for this disease is elephantiasis or lymphatic filariasis, however, it is commonly misspelt as elephantitis. Elephantiasis is endemic to the tropical and subtropical regions and it has claimed may lives.

What are the Different Types of Elephantiasis?

Therefore, any obstruction or damage to the lymphatic system or the lymphatic vessels leads disturbances in the lymphatic drainage. This in turn leads to swelling and inflammation in the body due to accumulation of lymphatic fluid, especially the limbs, genitals and breasts. Sometimes, bacterial infections may occur in the areas affected by elephantiasis which may further worsen the condition.

In some cases, swelling causes due to filarial parasitic infection goes to such an extent that it may become impossible to cover up the affected area.

In some cases, diseases such as tuberculosis, leprosy, leishmaniasis or sexually transmitted diseases such as lymphogranuloma venereum may cause permanent damage to the lymphatic system, thereby causing formation of elephantitis. Non- filarial elephantiasis may also be caused due to a medical condition known as edema which leads to accumulation of fluids in the body, thereby causing inflammation and swelling in various parts of the body.

How do you get Elephantitis?

Lymphatic filariasis is caused when elephantiasis parasites or worms damage the lymphatic system of the body, whereas, non-filarial elephantiasis occurs due to a person’s susceptibility to volcanic ash.

The lymphatic filariasis parasites such as Brugia timori, Wuchereria bancrofti, symbiotic Wolbachia bacteria and Brugia malayi enter into the body due to a mosquito bite (mostly due to female Anopheles, Aedes and Culex species of mosquito). When the mosquito bites a human, it transfers the larvae to the lymphatic system via the skin. The larvae grow within the lymphatic system to turn into a full grown parasite. The transformation of larvae to parasite occurs slowly over a period of approximately 7 years (in some cases even 40 years).

Take a look at these pictures to get a better understanding about what elephantiasis looks like. 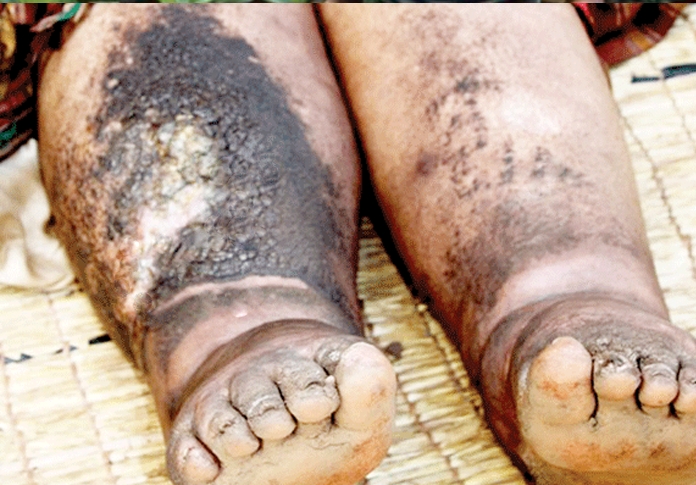 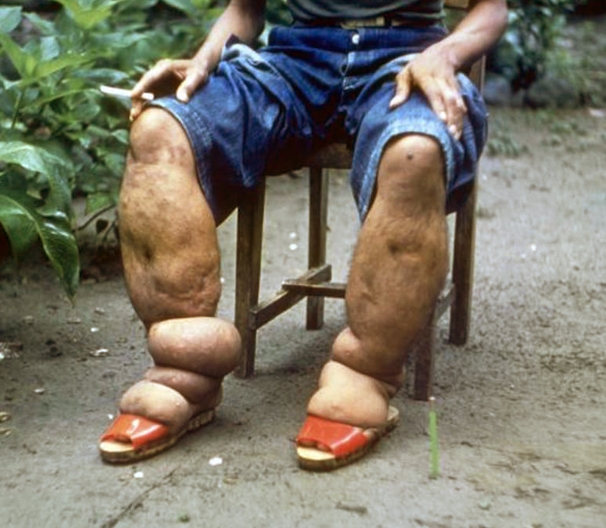 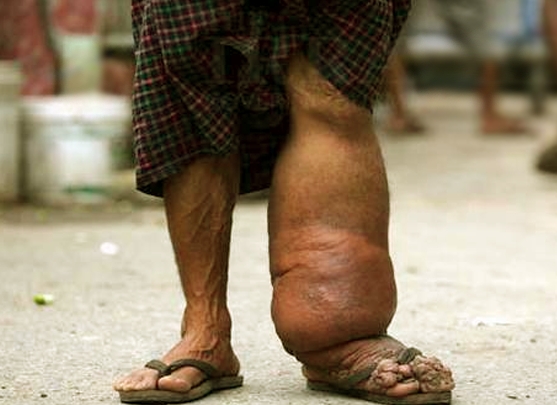 What are the Symptoms of Elephantiasis?

Symptoms of elephantiasis are dependent on the cause of the disease and in most cases, the symptoms are presented only at a later stage of the disease.

Filarial elephantiasis – A person with lymphatic filariasis may sometimes show no major symptoms of elephantiasis. Whereas in some cases; acute or chronic symptoms may be seen in a person infected with filarial parasites. As previously mentioned in this article, swelling and thickening of skin and underlying tissues is one of the main signs of elephantiasis. Swelling and inflammation of the skin occurs as a result of swelling in the lymph nodes. Swelling is commonly observed on the lower part of the body, however, head, hands and breast are also prone to get swollen due to elephantiasis.

Inflammation in elephantiasis is accompanied with unbearable pain in the affected area. Fever associated with shivering and perspiration may also be seen in patients suffering from elephantiasis. These symptoms are manifested as a result of the body’s natural tendency to fight the parasite causing elephantiasis. In some cases, rashes, tenderness and hyperpigmentation may also be observed on the affected areas of the skin. Skin ulcers, abscesses and wrinkles may also be observed in some people. Sometimes, bacterial growth occurs in these abscesses and ulcers, thereby causing pus accumulation and tenderness in the affected areas of the skin. In chronic cases, organs such as liver and spleen may also get enlarged.

Elephantiasis of the scrotum and testicle presents signs such as disproportioned growth of the scrotum and testicles, sometimes to enormous size. This not only causes pain and physical disabilities to the patient, but also leads to embarrassment and social outcast. Genital elephantiasis in females may lead to growth of painful tumors in the vagina and labia minora, which may even spread to the vulva.

Lymphatic filariasis which is caused due to transmission of parasitic worms by mosquitoes is a contagious disease. Lymphatic filariasis is contagious even during the stage when larvae are getting converted into full- grown parasites. The infected person may not even show any symptoms of elephantiasis at this stage. An infected mosquito can however transfer the parasite/ larvae from one person to another. In most cases, the mosquitoes transfer the larvae of the parasite, rather than the full grown parasite itself, into the human host. Though the filarial parasites grow within the lymph nodes, larvae of these parasites have the ability to penetrate into the bloodstream and can obstruct the blood flow through the blood vessels or the nodes. Other serious medical conditions such as gangrene and streptococcal lymphangitis may precipitate as a result of elephantiasis larvae infection.

Can Elephantiasis Be Treated?

Sadly, there is no absolute cure for elephantiasis. Also, no vaccines have been invented yet to prevent elephantiasis from occurring in the first place. Albeit, the good news is that a vaccine to treat elephantiasis may soon be introduced in the market. However, one has to seek medical help in case of elephantiasis to reduce the symptoms of elephantiasis (if possible) and to get some relief from the pain.

Treatment of elephantiasis involves cleaning the affected areas of the skin thoroughly on a regular basis. Disinfectants may be used to clean the wound, which may help in controlling the symptoms of lymphatic filariasis.
The physician may prescribe antibiotics like doxycycline and the patient may have to take antibiotics for a longer period of time to reduce the growth of elephantiasis parasite. However, antibiotics provide only temporary relief. Moreover, these antibiotics cannot be administered to children and pregnant women.

Some drugs such as combination of albendazole and diethylcarbamazine or albendazole and ivermectin may be useful in treating elephantiasis parasite larvae that have not yet reached adulthood. However, it is important to consult a physician before taking any medication in order to ensure that you do not end up worsening your condition.
If antibiotics fail to provide any relief, one may have to resort to surgical procedures to reduce the pain and other symptoms of elephantiasis. Surgery is often conducted in case of genital elephantiasis. In many cases, surgery has to be repeated many times to clear the thick fibrous or fatty tissues and the dead worms. The physician may also advice manual lymph drainage to remove the fluid collected in the affected areas.

Non- filarial elephantiasis may be treated by preventing further infection by keeping the affected areas clean and application of ointment regularly.

If you are living in an area which has high incidence of filariasis, it is advisable to take preventive measures to avoid contracting the disease from an infected person. Ensure that effective controls are taken in your area to prevent breeding of mosquitoes. Wearing shoes while walking and use of mosquito repellent creams and nets may help in preventing elephantiasis from occurring. Talk to your doctor about the feasibility and safety of taking a single preventive dose of diethylcarbamazine if you stay in an area where elephantiasis is highly prevalent. It is very important to keep the parasite or the environmental factors causing elephantiasis at a safe distance in order to save yourself from the trauma and embarrassment caused due to the disease.