What is Erosive Gastritis?

One common erosive gastritis condition is to have it in the antrum, which is the short conical portion of your esophagus below your diaphragm. This is a disease that can happen to anyone regardless of age, gender or race.

What are the Symptoms of Erosive Gastritis?

Due to the internal erosion bleeding could occur inside your stomach resulting in having blood in your stools or vomit. Some of the other symptoms that a person might experience can include:

The main cause of erosive gastritis is having a weakened or damaged stomach lining. When a person has erosive gastritis in the antrum it is usually caused by the gastric juices that irritate the upper curvature of your stomach which usually will lead to stomach ulcers. Some of the other causes can include:

Before any treatment can be started the physician will usually have you have a stool test, blood test, and x-ray to correctly diagnose this condition. The physician may also use an endoscope to look at the lining of your stomach. If it found that you have a mild case of erosive gastritis your physician can treat it with antacids to help reduce the inflammation.

If it is a serious case of erosive gastritis your physician can treat it using medication like proton pump inhibitors or acid blockers. To treat the inflammation of your stomach lining you will usually be given a prescription for antibiotics, especially if the inflammation is caused specifically by the bacteria H.pylori.

You should not take any over-the-counter medications without seeing your physician first and getting their okay to use them. One important thing to remember is that if it is not treated quickly it can increase your risk of developing stomach cancer and can also lead to developing stomach ulcers.

There are also some home remedies you can use to help get rid of the symptoms caused by erosive gastritis. Because stress can cause erosive gastritis you should try to reduce your stress levels by trying meditation or yoga.

You should also follow a healthy diet which means that you should cut back on spicy and acidic foods because they can increase the amount of acid in your stomach. You should also eliminate from your diet all fried and fatty foods, and milk, including products that contain milk.

Instead you should be eating a healthy diet that includes lean proteins and high amount of fiber such as apples, cherries, bananas, bean, non-acidic vegetables and fruit, cabbage, etc. You should also completely avoid caffeine and alcohol.

Stop smoking if you smoke. You should also make sure that you are eating your meals at regularly set times and avoid late night snacking.. You also need to have an established exercise routine that you do on a daily bases and drink plenty of water. 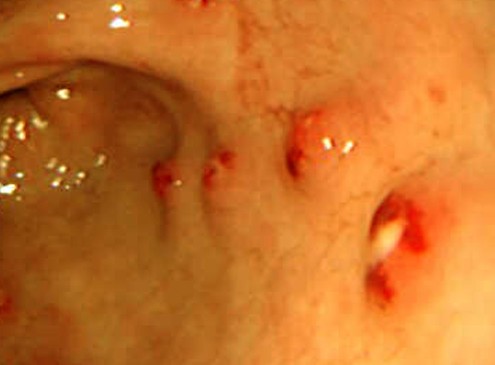