What is Glioblastoma Multiforme?

This is a form of malignant brain tumor. When a person has this type of brain tumor it will emerge and spread quickly. Although anyone of any age can get a brain tumor, this particular type is one that will typically affect people over the age of fifty. When this tumor starts out it is usually a small lesion that is precancerous within the parietal, temporal, or frontal lobe of your brain. These lesions become malignant and start to quickly spread. This type of tumor can go from a small lesion to a fully formed tumor in less than twelve months. It is an aggressive form of cancer that can migrate to the other lobes of your brain. If it not treated it can invade your brain stem and then other parts of your body.

It is one of the most common types of brain cancer and is thought that it affects one in every fifty thousand peoples with five hundred thousand cases a year in the United States. This type of cancerous tumor is often described as a grade four astrocytoma. This is a brain tumor that has formed from cells that are called astrocytes. The grade four means that this is the type of cancerous tumor that grows rapidly.

The symptoms glioblastoma multiforme will vary from one person to another and the reason is that the cancer can affect different areas of your brain. In most cases the common symptom that all seem to share is memory loss. In the early stages of this tumor it may not cause any symptoms that are noticeable. As it begins to grow you might start to experience:

When the glioblastoma multiforme is in the late stages it will usually cause these symptoms:

There are some symptoms that are commonly found in all people who have a glioblastoma multiforme which include:

There are some people who will have a stroke or seizures because the tumors are disrupting the electrical pathways in their brain. It is very important that you tell your physician any possible symptoms of having a possible glioblastoma multiforme so you can get an accurate diagnosis and start the right treatment immediately.

Most physicians are not sure what triggers the development of the glioblastomas but according to research that has been done suggests that genetics often play a significant role in the development of these brain tumors. Many patients that are diagnosed with a brain tumor have a family history of other cognitive problems and cancer. There have even been some professionals that believe that certain environmental factors can lead to tumors but at this time there is not enough reliable scientific research has been done to confirm the professional’s hypothesis. Two of these environmental factors that they think can cause these type of tumors are being exposed to toxic chemicals and using a cell phone

When the physician detects a tumor the treatment is usually a combination of surgery, radiation treatments, and chemotherapy. This combination of treatment will usually help to ease the symptoms of this medical condition and help slow the progression of the cancerous tumor. For small tumors in the early stage surgery is the treatment that is preferred so there is a chance that the cancerous tissue can be removed entirely from your brain. Many times, even if diagnosed in its early stages, it can be hard to remove the entire tumor because it tends to spread throughout your brain rapidly. Even if the surgeon does manage to remove all of the tumor glioblastomas will typically recur. Unfortunately most glioblastoma multiforme tumors are not detected early enough for the surgery to be effective by itself. With most cases it is recommended that radiation therapy and chemotherapy be used to help ablate the cancerous cells that are left behind after having the surgery. Because this cancer is persistent and aggressive it is often not possible to eradicate the cancer entirely.

When starting treatment for glioblastoma multiforme the first thing that is usually done is surgical removal which is called a resection but not all are operable, especially if they are located on your brain stem or anywhere where the resection would cause you more harm than improving the situation. After surgery you would undergo radiation treatment for four to seven weeks five days a week accompanied with chemotherapy. After you are done with radiation you would have a maintenance protocol of chemotherapy for several more months. Because radiation therapy and chemotherapy will usually make people sick and feel worse than the tumor does will opt to not to have treatment because they know in the end there is no cure so they decide to just enjoy what time they have left instead of being sick until the end.

The life expectancy will vary from person to person. Many times how long they will live depends on their age because the younger you are when diagnosed with glioblastoma multiforme the longer they tend to survive after surgery, what type of treatment is received, the position and size of the tumor. They also look at their Karnofsky performance status. This is a test that measures your ability to perform simple everyday tasks. After being diagnosed with glioblastoma multiforme most live less than a year with the average being anywhere from just a few weeks to a couple of years. Approximately four percent live longer than three years after they are diagnosed. 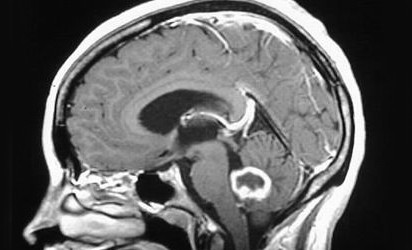