What is Valsalva Maneuver ?

Valsalva maneuver pertains to attempted forced exhalation against the closed airway. It is done by closing the mouth and pinching the nose shut while pressing out.

It is done to clear the ears during coughing, bowel movement, or as an id in diagnostic procedure and treatment. (5)

It was named after Antonio Valsalva who is a famous physician in the 18th century. During those times, it was used to evaluate the cardiovascular system. It can be done both consciously and unconsciously by those people who are engaged movements encounter resistance such as in strength training. (4)

There are various types of Valsalva maneuver. They include the following: 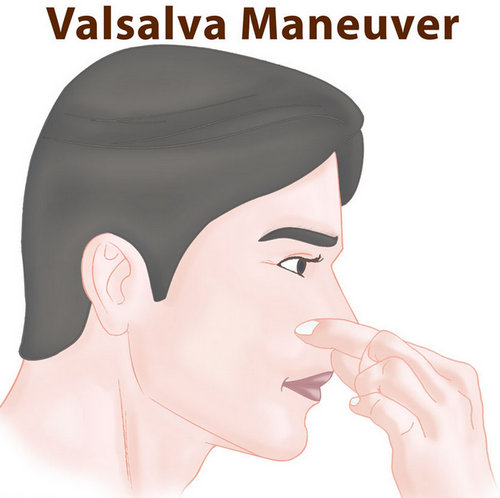 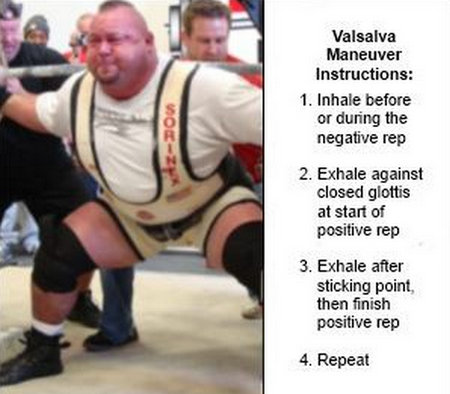 The four stages/phases of Valsalva maneuver

Valsalva maneuver as a diagnostic aid

Valsalva maneuver can be used to proactively check various medical conditions such as:

Valsalva maneuver as a part of vagal maneuver

When performing this procedure, the patient should be put in supine position. The patient will bear down and strain against a closed glottis. If the patient finds it difficult to follow the instruction, then you have to try another option of doing it.Instruct the patient to put the tip of their own thumb in their mouth and act as if the patient is going to blow a balloon. A 15-second strain is as effective as 30 seconds in patients with supraventricular tachycardia. Valsalva maneuver helps increase the vagal tone. It is the preferred method because it is highly effective in patients with supraventricular tachycardia, especially in elderly patients.

Why Valsalva maneuver is performed and what are its benefits?

When is Modified valsalva maneuver used?

A modified Valsalva maneuver is helpful in people with arrhythmia or abnormal heart rhythm. It can help terminate the attack. To perform this procedure, you need to blow against a closed glottis. The patient should be lying down face up and gently raise the leg. You will need an assistant to do this. However, this procedure is only effective in about 54% cases.

It helps in purple pushing during the second stage of labor. However, this should be done with utmost care because doing it the wrong way could result to rupture of an eardrum. (6)

Valsalva maneuver as a part of exercise routine

Many strength and conditioning trainers recommend Valsalva maneuver to include in the weight lifting exercises. The maneuver is usually performed during the work phase of the lift. Prior to exercising, the person should take a deep breath and hold the breath through the most difficult phase of the lifting process.

To complete the lift, a powerful exhale should be made. Improper breathing might have severe consequences in weight lifting.

Valsalva maneuver can significantly increase the rigidity of the torso. Hence, it will be easier for your body to support the heavy loads. It is the reason why those performing heavy lifting are advised to include Valsalva maneuver as part of their exercise routine. (1, 2, 4, 9)

Valsalva maneuver in women with incontinence

Making Valsalva maneuver a part of exercise helps in improving incontinence in women. About 30% of women are unable to contract their pelvic floor muscles voluntarily.

Performing Valsalva maneuver religiously can help address the problem with incontinence. On the first few weeks of the exercise program, you won’t notice any improvement.

It will definitely take some time, but is proven to work especially if done the right way. Performing Valsalva maneuver while holding the breath lead to contraction of muscles in the thighs and buttocks. The pelvic exercise along with Valsalva maneuver is popularly known as the Kegel exercise. (6)

Valsalva maneuver is the test used to assess the presence of lesions or injuries to the spine. When abdominal pressure is increased, the intrathecal pressure increases too. Intrathecal is anything that is happening in the spinal canal.

During the Valsalva maneuver, the intrathecal pressure increases which leads to pain secondary to lesion, herniated disc, or anything that occupies the space in the spinal canal.

When pain is felt in such area during Valsalva maneuver, then you have to consult your doctor to thoroughly assess your condition.

Valsalva maneuver as a form of exercise can help a lot in elderly patients. However, precaution should be observed, especially in patients with osteoporosis because of some limitations in performing range of motion exercises.

Precaution should be given as well to elderly with high blood pressure as strenuous exercises can further elevate the blood pressure.  (8)