What is Dentigerous Cyst?

This is the type of cyst that forms around the enamel crown of your tooth that has failed to erupt from your jaw. It is a type of odontogenic cyst, which is cysts that are associated with tooth development. The dentigerous cyst is the most frequently found cyst in this group and accounts for one-fifth of all cysts found in the jaw. It is also known as a follicular cyst and is normally non-cancerous, or benign. Approximately three-fourths of these type cysts are found in your lower jawbone and most often occur singly. Dentigerous cysts are very rarely seen in children and most often occur on permanent adult teeth and in supernumerary teeth. They are found in both genders and who are in their twenties to thirties.

As with most cysts they are a hollow lump that is filled with fluid. With a dentigerous cyst, in most cases, there are no symptoms but you could experience severe pain if it large enough.

When a person has a dentigerous cyst they most often occur in association with the other teeth which often become impacted. These are usually your wisdom teeth. A dentigerous cyst forms when the fluid builds up inside the follicle, also known as the developmental sac that surrounds a tooth that has not erupted, or come through the gum. As the enamel crown finishes forming the fluid is accumulating and the cyst ends up joined to the tooth at the point where the root and enamel meets. It is classified as a dentigerous cyst when the edge of the lesion is more than five millimeters from the enamel of the tooth.

When you have a dentigerous cyst it the dentist may be able to recognize it on x-ray unless it is very small.

Usually the dentigerous cyst is surgically removed along with the tooth that is associated with the cyst unless the cyst is very small. There is no medicine that can be used to get rid of the cyst so surgically removing it is the only option. If the cyst is large it is usually drained before surgically removing it to avoid fracturing your jaw or causing complications. If it is not surgically removed it will usually be monitored to see if it is increasing in size and/or causing any problems. Once the dentist has the dentigerous cyst removed it will be microscopically examined in order to distinguish it from certain tumors that can mimic the appearance of a dentigerous cyst on x-ray. The dentist is making sure it is not an ameloblastoma or squamous cell carcinoma, which is a type of malignant cancer that can arise occasionally from this type of cyst.

This cyst is generally small but large cysts can develop. It is possible with the larger ones that they can cause movement in your teeth or even disrupt the jaw. In some extreme cases it can even cause a fracture. The cyst may even become infected. In rare cases it can transform into an ameloblastoma which is a tumor that causes problems by growing and invading the tissues around it. If this happens you have to have it removed surgically. This tumor is benign also.

Although the cyst can cause some complications usually when the cyst along with the tooth is surgically extracted together there are no complications. It is also rare for the cyst to recur but there have been some rare cases that it does recur because the removal has been incomplete.

Collection of photos, images and Pictures of Dentigerous Cyst… 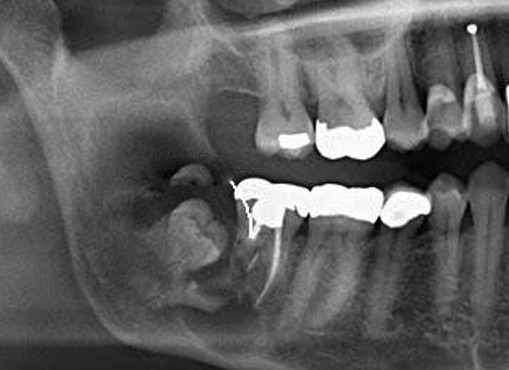 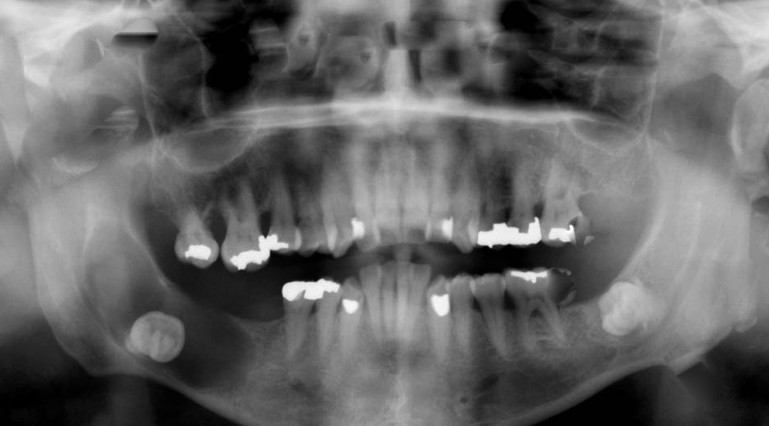